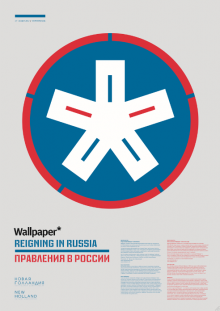 Turning documentary photography into a dramatic live art performance, Bolofo is setting up a photographic studio in one of the island’s event spaces and shooting the people who form the image of the city. Visitors will be able to watch Bolofo in action and find out more about Wallpaper’s latest international adventure. The project will take place at the Art Gallery on the island and will be opened to visitors from 12 p.m. to 8 a.m. on July 27 and 28. Part of a unique publishing event, Bolofo is linking up with the Wallpaper* editorial team as they move on Moscow, St Petersburg and beyond to put together November’s Reigning in Russia issue, the final part of the four-year BRIC nations project.

Koto Bolofo
Koto Bolofo was born in South Africa in 1959 and raised in Great Britain. Bolofo has photographed and made short films for magazines such as Vogue, Vanity Fair and GQ. He has created advertising campaigns for companies including Hermès, Louis Vuitton and Dom Pérignon. Bolofo lives in the Vendée in France and his books with Steidl include Venus, I Spy With My Little Eye, Something Beginning With S, Vroom! Vroom!, La Maison, Lord Snowdon, Dreams, Horse Power and Grande Complication.

Wallpaper*
Truly international, consistently intelligent and hugely influential, Wallpaper* is the world’s most important design and style magazine. It attracts the most sophisticated global audience by constantly pushing into new creative territories and ensuring its coverage of everything from architecture to motoring, fashion to travel, and interiors to jewelry remains unrivalled. Wallpaper* has readers in 93 countries and has enjoyed unparalleled success in reaching the design elite right across the globe. To Wallpaper*, the world is one seamless marketplace, where consumers flit from one destination to the next, easily cross physical borders and cultural divides, and flirt with a variety of different brands, both established and undiscovered. Press Release, St. Petersburg. July 25, 2012 With 12 themed issues a year, a limited-edition cover by a different artist or designer each month, more than 600,000 Twitter followers and a monthly iPad edition, Wallpaper* has evolved from style bible to internationally recognized brand.

Starting January 2, QR-code confirming vaccination against COVID-19 and an ID is required to enter cafes and stores.

No QR-code is required to enter the Park, the Ice Rink, or public spaces of the Bottle House. Please, wear a mask, keep a safe distance and stay home if you feel ill.