1830
Construction of the naval prison is completed

1847
Military engineer Mikhail Pasypkin constructs a storage facility and a foundry, following the plan from 1765

1863
The building is re-fitted according to the needs of the prison, which commences its preliminary operation

1897
First models for the squadron battleship Oslyabya are built

During the 18th century, the island of New Holland had served primarily as a storage facility; this designation was rapidly changing. By the middle of the next century, the ensemble of warehouses was joined by a series of new structures, including a naval prison, designed by architect Shtaubert. Its rounded form earned the nickname “The Bottle,” spawning the expression “stay out of the Bottle.” The prison was modelled after a corrective penitentiary; during their incarceration, sailors often gained new professional skills and received a modest salary for their work, which they received along with their freedom.

The island played a pivotal role in the development of the Russian naval fleet; by the end of the century, it would be the site of an experimental water tank, built at the initiative of Dmitry Mendeleev. Under the renowned scientist’s supervision, the island also gained a laboratory for the development of smokeless gunpowder.

By the beginning of the 19th century, it became clear that the system of storage facilities proposed by the architect Chevakinsky had only been partially realized; the vertical storage of lumber left the lower parts unused. It was decided to assign these barracks for naval inventory.

After the Decembrist Uprising in 1825, the city officials of St Petersburg decided it time to build several new prisons. In 1828, it was decreed that a naval prison should be built on the western part of the New Holland island, on the site of some dilapidated sheds no longer fit for use. The contract for the project was awarded to the military architect Alexander Egorovich Shtaubert.

The plan he submitted proposed a ring-shaped, three-storied prison, capable of holding 500 prisoners at once. It was quickly approved and realized within two years, though the prison was not used as such until the 1860s. Before that time, its cavernous spaces were used to house members of the Petersburg regiments, a temporary hospital, a gymnastics team, a tailoring workshop and warehouses. Only in 1863 was it finally outfitted as a prison. Quarters for the commandant were built attached to the guard tower. The existing part of the complex became complete with the final construction of the northeastern building along the Kryukov Canal. In this way, the canal gained one more rounded corner, with its columns ala Vallin de la Mothe. Supervising all of this work was the military engineer Mikhail Pasypkin.

Under the order of the director of the Naval Ministry Konstantin Mann, the new naval prison became the “first prison in Russia to be built on the model of the corrective penitentiary system, currently used in the best prisons in Europe.” The cells were constructed so that the prisoners could use them only to sleep, while in the daytime they were put to work, earning a small salary. The sailors thus gained new professional skills such as joining, turning, and hoisting, which they could put to use after their incarceration.

The unusual shape of the prison earned it the nickname, “The Bottle,” spawning the colloquialism: “stay out of the Bottle.”

Fr om 1890-1891, one of the buildings of the New Holland complex – a one-storied meat locker built in the mid-19th century – was converted into a laboratory for the Navy. According to the specifications of Dmitry Ivanovich Mendeleev, in addition to the laboratory, the libraries and a reception area, there was also a space designated as the “explosion room,” wh ere they conducted experiments with smokeless gunpowder.

In 1882, the Marine Technology Committee of the Navy (which oversaw all issues regarding shipbuilding) first looked into the idea of building an experimental water tank, wh ere ships could be first tested out. These plans – the first of their kind in Russia – came at the initiative of the great Russian scientist, Dmitry Mendeleev. In 1892, the island of New Holland and its surroundings of St Petersburg were selected as the site, and the construction of an immense concrete canal began. The tank was housed in a two-storied building that also contained administrative quarters and maintenance facilities. The first such tank in Russia, it was also the sixth such test facility in the world. Under the supervision of engineer Aleksey Grekhnev, some of the earliest operations included trials of models for the battleship Poltava and the Russia cruiser. The official date of the construction of the water tank is 1894. March 8 was the date that Tsar Alexander III carried out his official inspection, so this date was thus known as the founding of the TsNII in the name of the academic Aleksey Krylov.

Already in 1897, experiments with the prototype for the battleship squadron Oslyabya were underway. By the end of the 19th century, the water tank had provided critical insight, some of which is directly responsible for saving the battleship The Admiral-General Apraksin. 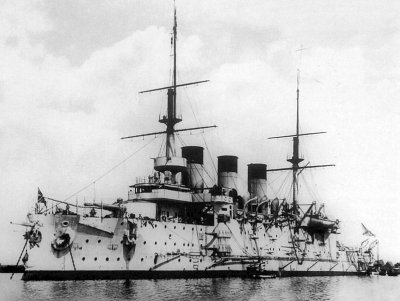 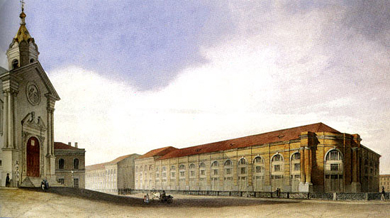 View of the island 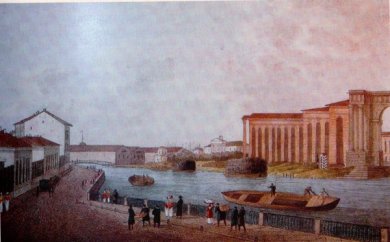 View of New Holland. Lithograph by A. Martynov 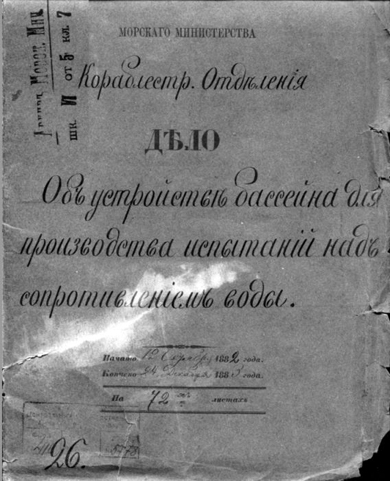 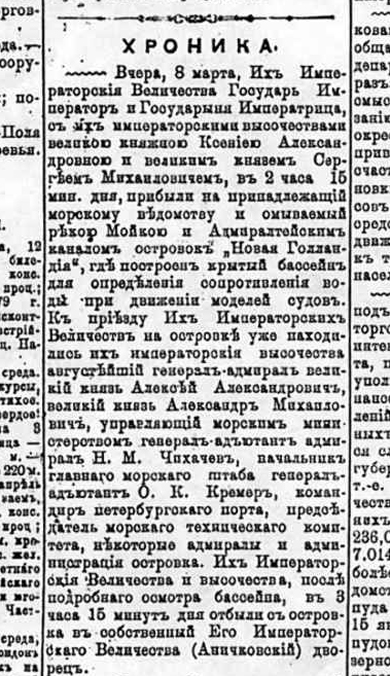