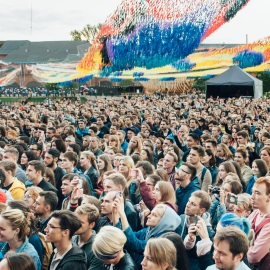 June 30 sees the start of the New Holland concert season, and on that date the island’s main stage will host a full concert by the Kito Jempere Band, featuring a unique line-up including Finnish jazz legend Jimmy Tenor, star of Russian electronica Mujuice, along with part- and full-time members of such groups as IOWA, Manizha, Videatape, Long Arm, SunSay, “Аssay”, Kuznya Band, “The Kondakov Trio” and a concert orchestra.

The main headliners for the New Holland summer concert season will be the Texan singer-songwriter Leon Bridges (8 July), the Los Angeles-based king of Lo-Fi and freak-folk Ariel Pink (22 August) and the Dutch-Iranian pop singer-songwriter Sevdaliza (21 August). The Leon Bridges and Sevdaliza concerts will be staged as part of Mosaic Music, a series of music-related events organised in collaboration with the “Garazh” museum of contemporary art, featuring Russian and international musicians and artists, people who either defined music’s development in the second half of the 20th century with their compositions, or are shaping our understanding of today’s world through the medium of sound.

New Holland will also stage concerts by the Moscow Contemporary Music Ensemble (6 July), the “VolkovTrio” neo-jazz collective (7 July), indie-group Race to Space fronted by Miriam Sekhon (13 July), tragic-rock outfit Videatape (20 July), hip-hop performer Antokha MC (10 August), and the No Wave group “Leto v Gorode” (“Summer in the City”) (17 August). On 25 August, the Mind and Movement gala concert for the Context festival of contemporary choreography, organised by Diana Vishneva and Studio Wayne McGregor, will take place in “The Bottle” courtyard, while 2 September sees a charity festival for the “Anton’s Right Here” foundation, whose headliners will be confirmed in  and on 20 September a special concert will also be held in The Bottle courtyard as part of the Earlymusic festival of ancient music. The concert season will close out with a performance by the electro-pop group Tesla Boy on 22 September. Along with the main concert programme, The Bottle courtyard will continue to stage concerts as part of the “Jazz Wednesdays” programme, as well as boogie-woogie and lindy hop dance masterclasses with live music.

MAIN EVENTS OF THE SEASON

7 JULY Annual city-wide “Dostoyevsky Day” festival: masterclasses for children, a performance of “The Idiot”, and a concert by the “VolkovTrio”

13 JULY Race to Space in concert on the main stage

20 JULY Videatape in concert in “The Bottle” courtyard

Backyard Party on “The Bottle” lawn

9 AUGUST “Leto v Gorode” in concert in “The Bottle” courtyard

21 AUGUST Mosaic Music: Sevdaliza in concert in “The Bottle” courtyard

22 AUGUST Ariel Pink in concert on the main stage

22 SEPTEMBER Tesla Boy in concert in “The Bottle” courtyard

“Jazz Wednesdays” and rock’n’roll in “The Bottle” courtyard

Open-air yoga and contemporary dance with the Context Pro studio