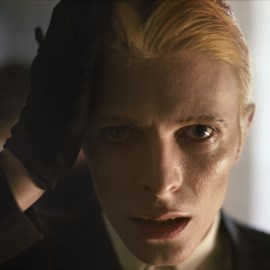 On 27 October the New Holland Pavillion will see the opening of an exhibition of works by the British photographer and produce Geoff MacCormack which document his friendship and travels with David Bowie.

Geoff MacCormack, perhaps better known as Warren Peace, was one of David Bowie’s closest friends. For three years between 1973 and 1976 MacCormack accompanied Bowie on tour as a backing singer, dancer and percussionist. During that period he was involved in the making of six Bowie albums, starting with Alladin Sane and ending with Station to Station. He was also co-writer on the tracks Rock’n’roll with me from the album Diamond Dogs, and Turn Blue from the Iggy Pop album Lust for Life.

In addition to the 70 photographs, the exhibition also includes Bowie and MacCormack’s film The Long Way Home, a diary of their journey to Moscow on the Trans-Siberian express. Bowie films using a  cine camera, while MacCormack takes the photos, resulting in a travelogue made by wandering musicians, and if Bowie mainly filmed the Russians, then MacCormack mainly filmed Bowie.

There will also be a packed programme to accompany the David Bowie. Rock’n’roll with me exhibition at New Holland: discussions featuring Geoff MacCormack with Artemy Troitsky, and Francis Whately with film-critic Maria Kuvshinova, film-screenings of “David Bowie: The Last Five Years” and “The Man Who Fell to Earth”, a meeting with the translator Dmitry Simanovsky, as well as a party at Kuznya House featuring the DJ and musician Rusty Egan (UK).

David Bowie. Rock’n’roll with me will be on at the New Holland Pavilion until 16 December. Free admission.