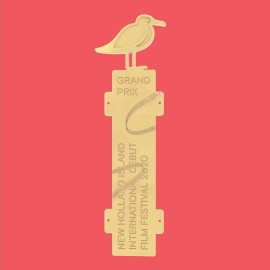 The first New Holland Island International Debut Film Festival is taking place from August 14 to 28, 2020. Films from the competition programme as well as works of jury and some out of competition films can be watched online on the Nonfiction.film platform. The international jury was judging the programme remotely and selected the winners on Sunday, August 23.

*The selection of the Jury Award winner was not unanimous. Members of the Main Competition Jury have also decided to award a Special Mention to Oroslan with the following statement: The memory of someone who passed away circulating, within a community, as a thin and discreet thread, becomes the motif for a beautiful portrait of human fragility and its poetic force.

The Garage Screen cinema of the Garage Museum of Contemporary Art will host an echo of the New Holland Island International Debut Film Festival from August 30 to September 11 and will include screenings of the winning films and some of the premiers from the main competition and out of competition programmes. Some screenings will be followed by Q&As with filmmakers, film critics and discussions with researchers. Until August 28, the competition programme films are also available online on Nonfiction.film platform.

A special programme Inventing the Future dedicated to different concepts of the future and the connections between cinema and modern philosophy will be shown in Garage in full. The programme was named after the work of a young experimental director from Canada Isiah Medina which is based on the book of the same name by Nick Srnicek and Alex Williams. Other films include an interview with a cyberfeminist Donna Haraway: Story Telling for Earthly Survival and a poetic video-essay Eurasia (Questions on Happiness) dedicated to Eurasianship by Metahaven, Dutch art and design collective. Screenings of these three films will be followed by discussions with various researchers from Russia.

Another key event of the New Holland Island International Debut Film Festival’s echo will be the Russian premiere of IWOW: I Walk On Water, shot by an African-American director and photographer Khalik Allah. This three-hour cinematic trip through the streets of Harlem in search of enlightenment is one of the brightest and most unconventional documentaries of this year.

Tickets are available at the Garage Screen web page.

You can find additional materials for press here.