The Opening of House 12 at New Holland Island 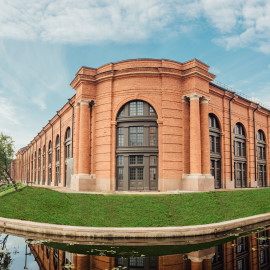 In early 2020 New Holland Island will complete the restoration and renovation of the building No.12 — a former timber warehouse located at the intersection of Kryukov and Admiralteysky Canals. A new part of the park space, adjacent to the summer stage and the eastern side of the Island’s Basin, will also be unveiled.

The new page in the project’s history will also present the residents of House 12: Garage Museum of Contemporary Art, The Digital House of Gazprom Neft, and Matilda Shnurova’s restaurant and bistro CoCoCo.

The project is managed by New Holland Development, an affiliate of Roman Abramovich’s Millhouse LLC, founded to implement an investment contract for the restoration and renovation of the New Holland Island. Restoration work is carried out together with companies SDK and VMS, in accordance with the requirements of the Committee for the State Preservation of Historical and Cultural Monuments. The general contractor for all construction work is Baltic Engineering Company.

The landscape plan was developed by the architectural bureau West 8 together with landscape architect Linda Bird, in accordance with the master plan for the development of the New Holland Island territory. The plan was signed off in 2013 by the Committee for the State Preservation of Historical and Cultural Monuments.

The architectural illumination of the buildings was designed by the British design studio PJC Lights. The interiors of House 12’s public spaces (entrances, halls, staircases) as well as all decorative work were created by Ludi Architects bureau.

*The area around the building, as well as the new part of the park will be open to the public in early 2020. The opening dates of the House 12’s resident projects will be announced at a later date.

Additional materials for the press can be found at the link.

House 12 is the fourth building to be restored in the New Holland: Cultural Urbanization project. It was built later than the rest of the Island’s buildings, in  by a military engineer Mikhail Pasypkin and was based on the original plan designed by architects Savva Chevakinsky and Jean-Baptiste Vallin de la Mothe. Like the rest of New Holland’s larger buildings, it was designed to store the timber delivered to the Island for the needs of the Admiralty shipyards. It was later used as a warehouse, and at the end of the 20th century a textile factory was operating here.

House 12 consists of two buildings: the corner building 12a, which overlooks Truda Square and the Admiralteysky Canal, and building 12 that stands along the Kryukov Canal. The two buildings are adjoined and according to the new plan will have a through walkway. The total area of the building is 15,900 m2.

The restoration and renovation work on the building took three years. The same technology was used for the restoration of the facades and brickwork as for the previously restored buildings of the Foundry, the Commandant’s House and the Bottle House. The restoration work on House 12 included more than 20,000 m2 of brick facades, interior walls and vaults, using about 400,000 historical bricks. More than 300 m2 of historical granite and limestone elements were restored, as well as over 4,500 m2 brick seams. Work was also carried out to restore and renovate the Monier vaults with a total area of more than 6,000 m2.

The building is equipped with modern energy-efficient engineering systems. A fully mechanized parking area for the residents of the building has been installed at the pedestrian bridge across the eastern canal, which allows the Island to maintain a car-free approach.

Access to the Island will still be allowed for official transport only.

The interior of public spaces is designed to fit in with the style of other buildings of the Island: the “thermometer” lamps on the interior facades repeat the lamps of the courtyard of the Bottle House, a cast-iron canopy at the main entrance to House 12 echoes the entrance groups of the Foundry and the Commandant’s House. There are also new elements in the design — limestone and brass on the walls of the stairwells, black granite and metal in the cladding of the steps.

Special attention was paid to the gate fillings of the building’s facade. These are giant wooden structures with doorways on the ground floor which completely replicate the original drawings. Twenty-one such “windows”, all eleven meters high, have been installed alongside the Admiralteysky and Kryukov Canals. The constructions are made of oak in accordance with modern high-tech production standards. Modern energy-saving windows have a triple glazing, which provides improved heat and sound insulation indoors.

Besides the opening of House 12 building and the adjacent park area, the First Krushteyna bridge will be opened and will function as another entrance to the Island.

A new part of the park space with the area of 2,100 m2 will also be opened together with the building.

The new development will allow access to the walk alongside the Kryukov Canal, that will be outfitted with benches and gravel pathways.

The new part of the park will house an apple orchard, complete with ornamental shrubs, creating green pavilions with wooden benches and chairs, that have been enjoyed by the Island’s visitors since 2016.

Planting of large trees will take place in the autumn of 2019. For this to be implemented, 26 apple trees, 33 maples, 119 shadbushes and over 20 other fully grown trees were brought from European nurseries. Decorative shrubs and plants will be planted in the spring of 2020. As part of the landscaping work, more than 3,000 m2 will be paved, more than 1,000 m2 of gravel pathways and 4,500 m2 of lawns will be laid.