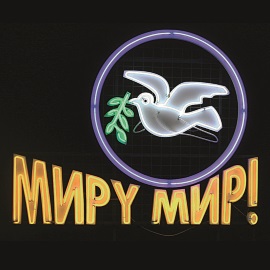 On 9 June the neon art installation “Miru Mir!” (“Peace on Earth!”) created by the Hungarian artist Gyula Varnai will open on New Holland Island. The piece will be installed on the façade of Block 17 behind “The Bottle”, and will be open to the public until 30 September 2018.

“Miru Mir!” is the Russian-language version of the work “Peace on Earth!” which was first put on display in the Hungary pavilion of the 57th Venice Biennale. A neon sign depicting a dove first appeared in 1958 on top of the tallest building in the town of Dunaújváros, where the artist grew up. Installed next to the dove was an emergency siren, and the juxtaposition summed up the whole absurd logic of the time: a Cold War, a war for peace.

At 19:30 on 9 June there will be a chance to meet the artist in the New Holland Pavillion. Varnai will give his thoughts on the work being put on display on the island, as well as sharing his experience of working as an artist

Apart from “Miru Mir!”, this summer New Holland will see the installation of a new work by Sasha Frolova, an inflatable island made up of abstract shapes and forms. The work resembles a cloud on which one can sit, daydream and get away from everyday worries.

The New Holland Herb Garden will be host to the “Crème Brulée” installation by the Voronezh artist Ivan Gorshkov. The composition is comprised of several separate sculptures and is done in the familiar style of the artist: multi-layered, unpredictable and dynamically changeable imagery. The surreal figures conjure up the sensation of latent power and the importance of the moment.

Gyula Varnai was born in 1956 in Kazinbarcika, Hungary. He was heavily influenced by a group of neo-conceptualist artists who only found fame in the 1990s. Varnai has become widely known thanks to his large-scale installations. His background in mathematics and physics does much to define his artistic endeavours. In Varnai’s works the esoteric mixes with the trivial, and everyday materials may be used to create grand assemblages. His most recent personal and group exhibitions have been in Budapest, Paris, Istanbul, Cologne and Venice. He lives and works in Dunaújváros, Hungary.