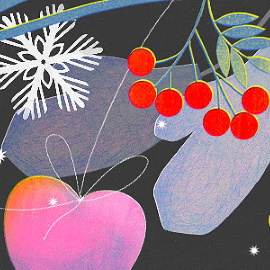 On 21 December the traditional annual New Year's Market at New Holland Island will commence its work in the courtyard of the Bottle House and last until 8 January. Fourteen kiosks with gifts and food, along with street hearths and chairs will be gathered around an 8-meter New Year’s tree. Six more participants of the New Year's Market, as well as children's master classes Santa’s Little Helpers Workshops will be based in the Pavilion on the main walkway. On December 14, a New Year’s tree market will open next to the main entrance of the Bottle House and work until December 31.

This year the charity kiosk of the New Year's Market will again host New Year’s Post where anyone can leave a gift for people who found themselves in difficult life situations, but need the simplest things – support and care. The collection is organized for the wards of Nochlezhka, AdVita, Anton’s Right Here Foundation, the regional branch of Starost v radost, the Center for homeless animals Poteryashka. Donations will be delivered to wards by volunteers.

The entire territory of New Holland Island has been decorated for the opening of the New Year's Market: another large Nutcracker has been added to the Island and took its post at the Foundry, joining the other three Nutcrackers, guarding the entrances of the Bottle House. All pavilions are decorated with spruce garlands, there is a pyramid of giant New Year’s tree ornaments on the pontoon, and Moravian stars are lit on the trees. In the center of the Island there is a garlanded outdoor Ice Rink.

The programme of New Year's events will include performances of street orchestras in the Bottle House courtyard, The Nutcracker on the big screen, as well as children's New Year plays at and Children Talk space in Commandant’s House.

On the days of the New Year's Market, The Pavilion will again offer Santa’s Little Helpers Workshops organized by the P.T.H. Creative Manufacture. Here children from 6 years old with the assistance of Santa Claus’s little helpers will learn to make traditional New Year decorations of different countries — from Mexico to Japan. Admission is free.

New Year's Market in the courtyard of the Bottle House

New Year's Market in The Pavilion

New Year’s tree market The shop YolokMnogo will offer fluffy Fraser firs, Danish spruces, real trees in pots and the best specimens from the Leningrad region. You can take your New Year’s tree with you right away or arrange a home delivery.

Banochki Jams and preserves made with the most unusual combinations of ingredients, peanut and chocolate pastes, salted caramel with various fillings and flavourings.

Snegi Warm and comfortable felt boots (valenki), produced in the village of Dolostsy, Pskov region. Valenki are made of felt with rubber sole and can be worn at home or outdoors in dry snowy weather

Dymov.ceramics Painted handmade dishes, Christmas toys and decorations, gifts and sweets from Suzdal. Dymov.Ceramics has been producing collections of decorative ceramics, tiles and crockery for many years, including collaborations with contemporary artists and architects.

Vintage shop Old Christmas toys, Bohemian glass, porcelain and ladies' jewelry from the last century from around the world.

Alphorn Raclette is a traditional dish of melted Swiss cheese with vegetables. It will be prepared in accordance with the classic recipe: with potatoes and gherkins, as well as on a baguette with pear, jamón and salmon.

Charity kiosk and New Year's Post in New Holland Souvenirs, dishes, textiles, made by students and wards of the foundations Anton’s Right Here and AdVita. All proceeds from the sale of souvenirs will go to charity. Gifts collection for wards of charitable foundations.

Kiosks of the Bottle House residents Cafes Bekitzer, Russain Vodka Room, Dzamiko and Surf Coffee based on the first floor of the Bottle House, have prepared special street food menus. At the kiosks in the yard you can try Israeli batsek dough balls, Russian pies, Georgian kutabs with cheese and herbs, as well as winter coffee drinks.

PARTICIPANTS OF NEW YEAR’S MARKET IN THE PAVILION

Peremena Cosmetics, perfumes, scented candles, badges, and accessories selected by the staff on the second floor of the Bottle House. Many items will be sold only at the New Year's bazaar.

Ptenci Market Children's shop from the second floor of The Bottle will offer gift sets in festive packaging: toys, giant coloring books, sets of cards, letters to Santa Claus, theater of shadows and many others.

Twin Pins Vintage and antique jewelry from Europe, America and Asia. Cameos from the early 20th century, sparkling brooches from the 20s and 30s, the artistic style of the 60s and the disco of the 80s.

True Knits Traditional wool mittens with northern and Baltic patterns, hand-knitted by residents of villages in the Pskov region.

21, 22, 26 December and 3, 8 January The bands Mosbras, ZeBrass, Olympic Brass and vibraphonist Alexey Chizhik will perform in the courtyard of the Bottle House. Admission is free. Detailed schedule on the website newhollandsp.ru

31 December Like the previous year, two screenings of the classic production of the The Nutcracker performed by Bolshoi Theater under the direction of Yuri Grigorovich will be shown on the big screen. Screenings will run from during every skating session. Tickets can be purchased on newhollandsp.ru/rink

21 December – 8 January This year the programme of Santa’s Little Helpers Workshops is dedicated to New Year traditions of different countries. Participants of the workshops will learn how New Year is celebrated in India, China, Mexico and other countries, and learn how to make New Year’s ornaments, masks and decorations of different peoples.