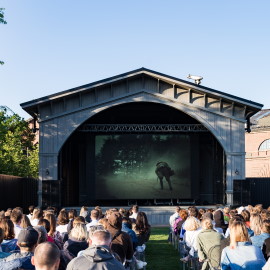 The first New Holland Island International Debut Film Festival would like to announce a programme of special screenings on the Island’s Main stage from August 17 to 22. The programme will include prize-winners of major international festivals, as well as a screening of winners and Russian participants of the Short Film competition.

Due to the epidemiological situation, screenings will be held with a limited capacity and in strict compliance with all the sanitary standards. Entry to all screenings is free but requires pre-registration. Screenings will be held daily from 9:30 pm. Wireless headphones will be used at all sessions to comply with the noise laws. Shows are held outdoors; rescheduling is possible in case of heavy rain. We recommend bringing warm clothes.

August 22, 21:30 Screening of the winning films of the short meter competition, as well as films of Russian contestants: News from the Other World, dir. Valentina Bek, Naked, dir. Kirill Khachaturov, Leave of Absence, dir. Anton Sazonov

The programme includes Russian and St. Petersburg premieres. Among the Russian premieres are the winners of the last Berlin film festival Never Rarely Sometimes Always by Eliza Hittman (Silver Bear Grand Jury Prize) and Undine by Christian Petzold (Silver Bear for Best Actress and the Prize of the FIPRESCI Jury, the international film critics association). The programme will also include the only competition entry that is not available online — the winner of the Rotterdam Film Festival The Cloud in Her Room by Zheng Lu Xinyuan (Russian premiere). St. Petersburg premiers will include Martin Eden by Pietro Marcello (Volpi Cup for Best Actor in the main competition of the Venice Film Festival) and The Woman Who Ran by Hong Sang-soo (the Best Director prize at the Berlinale — 2020).

This year’s competition programme is shown online on the Nonfiction.film platform from August 14 to 28. All funds from film screenings will go towards supporting homeless people together with Nochlezhka charity.

For more information about the films and programme please visit nhifilmfest.com

You can find additional materials for press here.