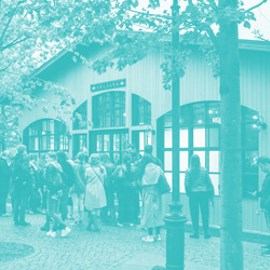 On 2 April the third season of the Open Lecture Hall series of regular educational events will open in the New Holland Island Pavilion. For 2019, the project will comprise 10 programmes: the Séance magazine film-club, the European University at St. Petersburg lectures, the philosophy programme, a series of lectures by the Garage Museum of Contemporary Art, lectures on architecture from Project Baltia magazine, social science lectures from the Higher School of Economics at St. Petersburg, lectures on science and technology from ITMO University, lectures on graphic design prepared by the New Holland Island design department, as well as a programme of lectures on contemporary theatre and performance theory and practice.

The objective of the Open Lecture Hall series is to promote high quality educational initiatives to a broad-based audience of visitors to New Holland Island. The disciplines covered by the lectures have been selected to appeal to people of all ages and walks of life. The lecture season on the island will continue until October. Admission is free of charge; attendees must register in advance. A comprehensive timetable can be found at www.newhollandsp.ru

The art of the present. Practical artistic strategy and practice

A new programme of public lectures focusing on the study of practical artistic strategies aimed at broadening art's horizons and achieving a qualitative transformation in surrounding reality. The lectures will be divided into a series of blocks covering the most popular practices in the field of art, including the archiving and institutionalization of art, participation-art and DIY projects.

The invited experts will share their observations and experience in adopting strategies for projects of various sizes. Attention will centre on self-organized festivals and institutions, various types of art-activism, along with the art of new technologies, street-art and new approaches to working with meaning and viewer-perception.

The first block of lectures is devoted to various forms of artistic activity – independent curator-strategies, art-activism and DIY projects, drawing on examples from Russian activist art, grass-roots initiatives in public art projects, creative self-organised groups and ways of institutionalizing street-art. Several of the lectures will touch on themes relating to the art of the future, including projects from the science & art series and artistic practices that open up new possibilities in the perception of art. The cycle will conclude with a series of meetings studying projects by the School of Engaged Art (St Petersburg) focusing on post-Soviet research.

This lecture series will examine modern society through the optics and tools of sociology, anthropology, political science, cultural and media theory.

How is “human science” possible without people? Which is more important to the global cultural economy – London or Siberia? Is sixty the new thirty? Can talent replace oil? What is work in the age of robots and craft breweries? Do classical museums and Instagram compete with one another? Do new technology and opportunities in education help to rid us of social inequalities based on class, gender and race?

These and other questions will be addressed by renowned overseas and Russian social scientists in dialogue with artists, industry professionals and the lecture audience.

The European University at St Petersburg presents a series of lectures entitled Don't forget to remember, focusing on the study of the politics of memory in a variety of aspects. How does information pass from generation to generation through scholarship and folklore, how and for what purpose were the monuments of the Soviet period built, what is happening to monuments in the USA, and how do monuments reflect the periods in which they were built. The lecturers will cover issues ranging from the regeneration of authoritarian regimes to sensory memory and unique religious discourse.

The lecture series will feature leading specialists and professors from the University, who will show the latest results of studies in the fields of history, anthropology, political studies and art history.

A cycle of public lectures on science and technology from ITMO University which will transport the audience to the very epicentre of the technological revolution, where every day new discoveries are being made which broaden the horizons of our contemporary understanding of the world and the capabilities of humanity. Leading scientists and science commentators will discuss how computer technology predicts epidemics, why economists scan the human brain, and why the world is in no hurry to combat climate change.

The invited scientific researchers will help lecture-goers to see scientific and technological progress through the prism of social, political and economic changes rather than in isolation from real life, by relating how machine learning affects our understanding of social justice, how scientific superpowers emerge, and where the myths about science in the movies originally stem from.

For the new season, the Séance magazine film club will concentrate its attention on films that cannot be found on the internet, and which are therefore almost impossible to come by without the assistance of a curator. Among the themes to be covered: rarities and curiosities from festival programmes, repercussions from film competitions, wide-ranging lectures based on historical materials, controversial theories about the near future and paradoxical discoveries from the recent past.

Lecture-goers will have the chance to interact with young directors, to watch rare films selected by the magazine's regular contributors, and to take part in special events combining film and related topics. The spring programme begins with short films: two screenings based on the competition programme from the Spirit of Fire festival for film-débuts, presented by the film critic and festival selector Anisya Kazakova, and Scéance contributor Andrey Kartashov, who this year sat on the jury for the short-film competition.

The subject of rational city is similar to the popular contemporary concept of the smart city, as a technological mega-machine for habitation, which at once controls people and serves them. The discussions will cover the systematising, constructivist, ordering approach to space – the approach which ultimately leads to the emergence of the smart city of today and tomorrow, even though this smart city is sometimes far from the posited ideal.

A range of invited historians, architects and urbanists will discuss various settlement models, both utopian and real: from the building reforms of Catherine the Great to the developer’s pragmatism of the 21st century. The lecture cycle aims to shed light on where the phenomenon of today’s megapolis first appeared from. The city of St Petersburg will take centre stage: a city created as a model for other Russian cities to follow, it came to formulate its own unique architectural tradition, one which still inspires urbanists to this day.

The design lectures are a showcase for leading independent studios, social projects and initiatives in the design field. Lectures, film-screenings, master-classes and one-day exhibitions, all in the name of sharing experience, creating new ideas and continuing the fight for a harmonious visual environment.

The relationship between film and philosophy has a long history: when the new medium first appeared in the moderne epoch, it provoked a great deal of thought, and not only about film itself. At various times in history, the filmmaker has frequently been a subject of discussion, a metaphor for thought and perception, a peculiar form of knowledge, and much more besides. Cinema, unlike works of philosophy, is familiar to all, and is an integral part of the collective human experience.

It is for this very reason that film can help us to understand contemporary, and in some cases largely inaccessible, philosophical concepts. In this lecture cycle, Russian researchers and scholars representing a range of disciplines will use individual films to resolve the philosophical problems that occupy their thoughts, along with the relationship between philosophy and film.

The academic study of performance is a field of knowledge which eschews rigid frameworks and definitions, primarily because the very word «performance» exists in a range of disciplines and is understood in different ways. Today, its interdisciplinary links extend from theatre studies and the history of dance to ethnography and anthropology, from linguistics and philosophy to physics, from sociology and political studies to gender studies.

This course of lectures will focus on performance as an art form, studied in a broad context. Practice, as well as theory, will be included in the course: documented and «live» performances, artistic interventions and situations which reveal the performance-related character of everyday behaviour.

Curators: Maria Beylina and Anton Flerov, curators of the Institute of Theatre, an educational project by the Golden Mask festival.

A programme of lectures which highlights the names and trends in contemporary Russian and international theatre that will define its future. The people featured in the lecture cycle, along with their work, may not be well known to the wider audience and may not even fit their understanding of what theatre is, and it is for this very reason that the curators feel it is important to talk about them now.

The contemporary theatre lectures are a continuation of the public Institute of Theatre programme, an independent educational project whose objective is the structured training of theatre professionals, and the study and critical analysis of new forms of theatre and new theatrical practice.