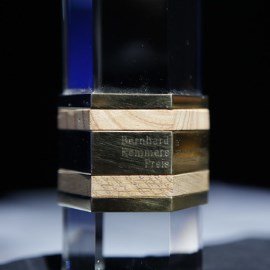 In November 2018, the 10th award ceremony for outstanding success in the field of conservation of historic architectural monuments took place in Leipzig, as part of denkmal, Europe’s largest trade fair for building conservation and restoration.

The architectural ensemble of New Holland Island received the Bernhard Remmers Academy award from the European Institute for the Conservation and Maintenance of Historic Buildings in the category Best International Project. The jury panel declared St Petersburg’s New Holland the best among international urbanistic projects for its “outstanding investor engagement, close cooperation of all project stakeholders, and restoration work to an architectural heritage site.”

The New Holland: Cultural Urbanization team would like to pay particular tribute to the restoration specialists, contractors, architects, in fact to everyone whose efforts were so highly commended by the international panel of judges. The restoration and alteration works to the Commandant’s House, The Foundry and the “Prison Tower” were carried out by VladMiraStroy and SZDK, Demetra put in place the initial safety measures, and Karst conducted the work to reinforce the foundations of one of the warehouse buildings, the Foundry and the “Prison Tower”. The project focused particular attention on the redevelopment and greening of the island, which was carried out by the Dutch company West 8, who put together a new design based on the successfully implemented general plan drafted by WorkAC. Work on the design of the temporary pavilions, interiors and other elements of the island was carried out by the young St Petersburg architects Sergey Bukin and Lyubov Leontieva.

In 2010, the company Millhouse won the tender to receive the investment contract and set to work on the project to restore and redevelop the island of New Holland. From 2011 to 2013, temporary Summer in New Holland programmes were organised, during which it was decided to reject the initial idea of building over the empty territory of the island, and instead to organise an urban park space with modern, practical infrastructure. In August 2016 work began on the first phase of restoring the New Holland architectural complex, which entailed redeveloping the park space with temporary pavilions, a system of engineering solutions and utility networks necessary for the island’s functioning, as well as the first fully restored buildings. Later on in 2016 and in 2017, the Forge, the Bottle House and the Commandant’s House were opened. Restoration work to the façades of the historic buildings is carried out under the oversight of the St Petersburg Administration Committee for State Control, Use and Maintenance of Historical and Cultural Monuments, and in full compliance with the requirements and regulations applicable to federal architectural monuments.