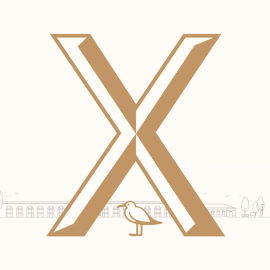 July 2021 will be ten years since the Island welcomed the first visitors of the New Holland: Cultural Urbanization project. These X years marked the beginning of a new history of New Holland Island and in many ways determined its future development.

Over the years, the project has restored the Commandant’s House, the Foundry, the Bottle House and House 12 and returned them to the city filling the buildings with new functions. The central part of the Island has been given to a park with a linden and garden walks, a herb garden, a children’s playground Frigate and wooden pavilions for exhibitions and events. This is 14,680 m² of restored squares and historic facades, 400 trees, 9,000 plants and shrubs, 27,000 m² of green lawn.

Today, New Holland Island is home to 14 gastronomic projects, including those from the world’s best restaurants lists, 14 shops and showrooms of independent designers and brands, 5 beauty and sports studios, as well as an educational project for kids in the Commandant’s House.

Since the beginning of the new history of New Holland Island, it has been visited by more than 11 million people, organised 4,000 concerts, lectures, exhibitions, and performances. The Island also has its own cinema and book festivals.

From the project team:

Ten years is certainly a small drop in the ocean of the three-century history of New Holland Island but for us it has been an adventure of a lifetime. Together with modern engineering solutions and restoration of the buildings, we did our best to lay into the foundation of the Island a certain cultural code and philosophy that will determine its development and future history.

We hope that everything that has been done over these past ten years is strong evidence in support of the very best intentions we have always had for the Island. There are two more buildings left to restore which means more fascinating projects and events that we will enjoy together. In the meantime, we would like to thank all those who have taken part in the project over the years which means we thank every single one of you.

PRELIMINARY PROGRAMME OF EVENTS FOR SUMMER 2021

The eighth summer programme of events will open on New Holland Island on May 29. Over four months, the Island will host around two hundred events, from performances of young bands and open-air film screenings to theatrical premieres and large festivals.

SUMMER THEATRE IN THE BOTTLE HOUSE (from May 29)

The highlight of of the 2021 season will be the Summer Theatre in the Bottle House the chamber space of which will host jazz and classical music concerts, performances of independent theater companies, parties, and other events four times a week. In the courtyard there will be a roof and seating for spectators, as well as a theatrical Buffet by Oggi for which Dmitry Blinov and the team at Oggi Bistro have developed a special menu.

Look up the programme of the Summer Theatre in the Bottle House events on the newhollandsp.com website. Tickets go on sale on May 17.

This year’s public art programme will be represented by two projects. In June, on the green slope of the Admiralteysky Canal there will be an installation by a young Russian artist Agatha Mann that encourages the viewer to enjoy life and not to expect miracles from it, and in the autumn, a real fog will be spread across the Island’s territory — an experimental work by the Dutch artist Edwin van der Heide.

The main music event of the season will be a large-scale three-day marathon X Festival. For one weekend New Holland Island will recreate the atmosphere of legendary music festivals in Europe and the USA. Dozens of artists will perform at different venues of the Island, headliners will be bands that took part in the project in different years and launched their careers here.

In July, the Island will host a programme of evening screenings Open-Air Cinema. On the large lawn in the open air, you will be able to watch cult films of recent decades, Hollywood and Soviet classics, French new wave films, musicals and more.

The II New Holland Island International Debut Film Festival will be held from July 30 to August 6. This year, the festival’s events will take place at all the venues across the Island. The programme will include over 50 feature and short films. The important part of the festival is its education programme with master classes, lections and discussions. Read more about the festival on its website nhifilmfest.com

An International Book Festival Revision, a fair of intellectual literature and a big city festival with an extensive programme of events, will take place for the third time.

A limited edition of souvenirs will be released especially for the tenth anniversary of the project. The symbol of this season will be the Roman figure X. Not only it symbolizes ten years, inscribed in the history of the Island but also succinctly refers to the neoclassical architectural appearance of New Holland Island given to it by Jean Baptiste Vallin de la Mothe and his famous arch installed on the side of the Moyka River between the timber buildings of the Island. The collection will be available both at the Information center and the online store shop.newhollandsp.com

The park infrastructure is also anticipating a summer update. The herb garden will reopen after a reconstruction with wider and more comfortable paths, the beach with a new setting will appear again at the Basin, ice cream kiosks and the playground for toddlers have also had their design renewed. The Garden walk, petanque and basketball courts, street chess, ping pong tables and a thick green lawn will also be open to visitors.