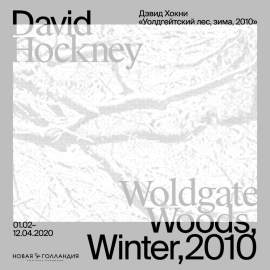 From February 1 until April 12 David Hockney's video artwork Woldgate Woods, Winter, 2010 will be shown in the courtyard of the Bottle House at New Holland Island.

The programme will also include screenings of two biopics about the artist (Hockney by Randall Wright and David Hockney at the Royal Academy of Arts by Phil Grabsky), as well as a series of events dedicated to Hockney's work.

The video work Woldgate Woods, Winter, 2010 demonstrates the artist's fascination with modern media and technology. The snow-covered forest in East Yorkshire, where the artist spent his childhood, was filmed using nine cameras to achieve what the author calls a Cubist film. The resulting digital video is presented on nine screens, allowing the viewer to simultaneously observe the changing parts in one visual space. You see every tree individually approaching, and then they gracefully exit stage right and stage left, swirling away, — as Hockney describes it. Using nine cameras overcomes quite a few of the differences between how a human eye sees and how a camera sees.

To show this unique work, the architectural bureau Ludi Architects designed a pavilion, set within the courtyard of the Bottle House. The idea for the mirrored pavilion is to not draw the architectural focus of the setting onto itself but to change with the atmosphere around it.

A British artist, graphic artist and photographer. He is one of the key representatives of pop art and one of the most influential artists of the 20th century. His work spans several decades some of which he spent in the United States. Hockney's works are in the collections of Tate Modern, the Metropolitan Museum of Art, the Pompidou Centre, LACMA, MoMA and other museums around the world. Hockney's retrospective at the Tate was the most popular exhibition in the history of the gallery and the most visited exhibition of a living artist.

Hockney. Director Randall Wright, United Kingdom, 2014, 112 min. 18+. The screening is organised with the support of the Cultural and Education Section of the British Embassy in Moscow.

Admission is free. The number of seats is limited, pre-registration is required.

Additional information for press available at the link.